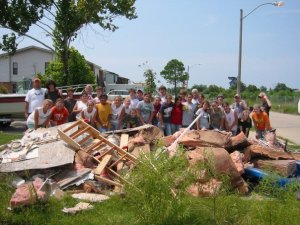 Two years after Hurricane Katrina, the youth group I interned for took their middle school students to New Orleans to gut houses destroyed by the storm. We pretty much told the kids to do as much damage as they could on them. We gave sledge hammers to twelve year old boys in order to tear down the walls, and wheel barrows full of sheet rock for 85 pound girls to roll out to the curb. I’m not entirely sure if the students realized the positive impact they made in the midst of the destruction, but for every house we gutted, another house was being rebuilt. It was the perfect trip for a bunch of unruly middle school students.

One night during the trip, our leader, Ken, took our students to a graveyard. (If you are unfamiliar with the topography of New Orleans, the city is built below sea level. Because of this, all the graves must be built above ground or the buried bodies will raise to the surface.) Mausoleum after mausoleum lined these expansive grounds. As we walked through the gates, Ken stopped us and told us to wander silently through the rows in the still darkness. Tentatively, we all set off through the maze of unknown stories, pouring over names and dates of lives we never knew or saw.

As we made our way back to the group – all a little shocked at our compulsion to place faces and histories on those who eternally rest – we sat down and listened to Ken as he drew us into an encounter with the Father. As a 20 year old college student, I burrowed in with the rest of the students, ready to be filled after being emptied from the former lives of those in the darkness. Just as Jesus would do, he asked us a question:

“Is what you are living for, worth what Jesus died for?”

I didn’t know what to make of his question, even though I was emotionally and spiritually moved by it. I thought it was powerful, yet maddening. When I examined the question over and over, I came to this conclusion: there is no way I can live up to that standard. If we I am honest, the answer to the question will always be “no.” In reality, how could it be anything but the negative?

I like James and John’s perspective on this question from Mark 10. For them to live for a life worthy of Christ, they need to be near him. “Grant that we may sit, one on Your right and one on Your left, in Your glory.” I can see the disciples logically working this out in their head. Ok, Jesus is a big deal. He will probably be in heaven – a high place in heaven, at that. We like him and think he is doing some pretty prophetic work – godlike, at that. Let’s partner up with him in eternity like we have here on earth – me on his left, you on his right. You know, to show him we are serious about him. Sound good?

So, they decide to test the waters with his Jesus fellow. Jesus responds: “You do not know what you are asking. Are you able to drink the cup that I drink, or to be baptized with the baptism with which I am baptized?” Um…I feel like our question shows we know what we are asking. It is pretty clear, Jesus. Also, I’m pretty sure we have shared a cup already. I think it was when you fed all those people near the sea. You didn’t really provide us with any cups. An oversight, that’s for sure.

Naturally, they replied, “‘We are able.” And Jesus said to them, “The cup that I drink you shall drink; and you shall be baptized with the baptism with which I am baptized.”’ Yes! Well, I guess I don’t get to be next to Jesus in heaven, but he must be giving us some sort of prize if we get to do the same things he does. I think I can handle that!

But, they didn’t quite understand.

Oftentimes, the disciples needed an object lesson to grasp the teachings of Jesus. Jesus prepares the ultimate metaphor during the Passover feast mere hours before his death, hoping and wishing they will understand the role of the Messiah. You said you want to drink the same cup that I am going to drink, well then, here is an illustration to help you understand:

“23 And when He had taken a cup and given thanks, He gave it to them, and they all drank from it. 24 And He said to them, “This is My blood of the covenant, which is poured out for many.”

Hmm…the cup as blood. Jesus, this whole act is little unsettling. You seem nervous. You talk of blood and flesh. Then, you have me eat and drink after you say these things – as if you toast to our future. What does this mean?

After some tense moments, and after the wine relieves some of the stress Jesus caused with his strange talk, the disciples follow Jesus to the garden to rest and sleep. Well, the disciples sleep, even though it is against the wishes of their unnerved friend.

Jesus, on the other hand, sits and prays underneath the prying eyes of the moon and stars. He can taste the foul cup as his parched lips stick to the rim – the metaphor becoming reality. It tastes sour – I presume like old wine set uncorked on the kitchen counter. “Abba! Father! All things are possible for You; remove this cup from Me; yet not what I will, but what You will.”

“Yet not what I will, but what you will” – Jesus’s response in the face of pain, persecution, and peril. This cup tastes rotten, but you say it is sweet. I trust Abba knows best…

Maybe I am projecting my own feelings onto Jesus (scary thought), but I don’t think Jesus liked the fact he was called to drink the cup of death. I know the gospels show his agony, but I think we tend to view more as, “Aw shucks, at least I am God, so it won’t be too bad.” I think, deep down, anger stoked the fire of sorrow – and rightfully so. I don’t think Jesus liked the fact he was going to have to endure the passion alone. He knew his Father would turn his face away; he knew his friends would deny him. Who would hope for that? I also wonder whether the Father didn’t like it anymore than Jesus did. I mean, it is the son with whom he his well pleased. Regardless of his thoughts and feelings — thoughts and feelings which would paralyze and cripple others in his same position, the cup was handed to him with a kiss, and he received it, even though he had the power to refuse:

“Yet not what I will, but what you will.”

So then, what does it mean to live a life worthy of the death of Christ? What does it mean to drink the cup of our Savior? I think it means this: living a life of prayer and petition, incessantly pleading for the ability to love him and recognize his love, no matter what cup the tastes like or feels like, and somehow being able to say with hope and peace: “Yet not what I will, but what you will.”