Small talk. I shudder at the very business of typing those insidious words and the meaning they represent. But, to navigate this world with any sort of sanity and success, you must learn how to endure it well and keep the chills which creep slowly up your spine veiled with the mask of cheer. These opportunities to shoot the breeze with a stranger happen often. They usually begin with a cordial “hello” and an exchange of pleasantries – names, place of origin, and marital status. From there, and fairly quickly I might add, the topic of work comes up.

Typically, this topic is a safe place to dig a little deeper into the heart, psyche, and passions of your new friend. The majority of this person’s conscious day is spent at work, thinking about work, or trying to find work, so focusing on this part of their life makes it easier and more interesting to develop any sort of continuity in the conversation.

Whenever I am asked to share my occupation in these situations, I tell them I am a teacher. Then, a part of them seems to light up with curiosity, and they just have to know what I teach. I tell them I teach sixth-grade History, Literature, and English. Their enraptured look of curiosity changes ever so slightly to a queer smile as they remember their middle school years. “I don’t know how you do it,” they say while shaking their head. Outsiders always share an unnatural depth of pity for job where I get to skirt the use of Excel. I don’t get it…

Pieter Breugel the Elder’s painting from the 16th century, The Peasant Wedding, adorns the banner of The Vicarious Life blog. It is also a painting my students encounter as we discuss the Renaissance. Teaching paintings like this help me forget the badgering my new friends perceive I deal with (correctly) on a daily basis. When I teach Breugel, being that they are sixth-graders, we don’t go into much detail about the painting (or really anything), but we marvel at the fact he is depicting peasants at a time and in a place when humanism and the study of the classics begin to creep out of the “graves” of the middle ages and into thought of the upper class – those who would be patrons of Breugel’s particular work. We wonder the reasoning; we hypothesize about the merits of painting the peasantry; but we move on quickly in order to cram in some other aspects of the Northern Renaissance.

Recently, I began to research Breugel with the hope of determining his purpose for including the peasantry in his later paintings. In the 16th century, Breugel followed the trend of northern artists and traveled to Italy to learn about the re-discovery of the classical modes of art and the innovation of artistic methodology which derived from the increase investment in the discipline. He apprentices under a famous artist for a bit, and then leaves Italy and returns to the north as a landscape painter. Yet, towards the tail end of his life, the motif of the peasantry, which is a removal from the humanistic ideology of the Italian Renaissance, begins to encompass his work.

As with anything of worth, once you in engage it critically and honestly, one thing becomes clear: the complexity of the very thing you examine. So it is with determining with any certainty Breugel’s rationale for representing the peasant life. Perez Zagorin, in his article “Looking for Pieter Breugel”, sums up the complex nature of the scholarship of Breugel as such:

They have been variously perceived as comic and sympathetic representations of peasant life by a humane observer, as detached and accurate descriptions by an objective recorder, as graphic allegories of human folly, as visions of an organic community which is passing away, as products of a literary and pictorial genre of satirical commentaries on peasant crudity, gluttony, and lechery, and as an expression of the social condescension and moral superiority which humanist intellectuals and the dominant landed and urban classes of the painter’s time are said to have felt toward peasants and popular culture.

He seems to be empathetic of the peasants and the life they live…No, no, his work is satire – yay intellectualism!…Wait a second, working the land, tilling the ground – Breugel is saying we can’t lose those traditional values! Yay peasants!…

What becomes known is what is not really known with any certainty.

Oftentimes, as critics search for meaning in a particular artist and his work, they attempt to give a voice to the artist. It is an incredibly necessary role of the scholar. These voices bring insight into a foreign world in which we, in the west, derive our identity from. But what do we make of these different voices of Breugel? How do we interpret the truth of Breugel’s peasant purpose?….

What do we make of the different voices in our own time today? How do we interpret the truth of the broken “peasant” life in our own culture of the 21st century? 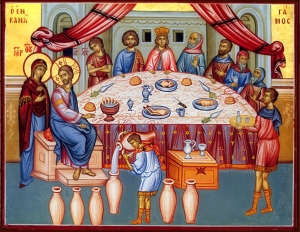 At the Vicarious Life, in the midst of our Post-Christian world, we know three things to be true as the many voices compete for our attention:

In our brokenness, in our peasant-ness, we are given the opportunity to live each day within the freedom of the wedding feast – a unique feast that is ongoing and present, and not only in the future. A wedding feast that is perpetual, even when it seems to have ceased long ago, or seems shrouded by the consequential toiling of the peasant life. The many voices which seek understanding aren’t meant to tear you away from the feast, but instead, they point to the feast itself…

If you pay close enough attention.