So Paul stood in the midst of the Areopagus and said, “Men of Athens, I observe that you are very religious in all respects. “For while I was passing through and examining the objects of your worship, I also found an altar with this inscription, ‘TO AN UNKNOWN GOD ‘ Therefore what you worship in ignorance, this I proclaim to you. “The God who made the world and all things in it, since He is Lord of heaven and earth, does not dwell in temples made with hands; nor is He served by human hands, as though He needed anything, since He Himself gives to all people life and breath and all things; and He made from one man every nation of mankind to live on all the face of the earth, having determined their appointed times and the boundaries of their habitation, that they would seek God, if perhaps they might grope for Him and find Him, though He is not far from each one of us; for in Him we live and move and exist, as even some of your own poets have said, ‘For we also are His children.’ “Being then the children of God, we ought not to think that the Divine Nature is like gold or silver or stone, an image formed by the art and thought of man.” Therefore having overlooked the times of ignorance, God is now declaring to men that all people everywhere should repent, because He has fixed a day in which He will judge the world in righteousness through a Man whom He has appointed, having furnished proof to all men by raising Him from the dead.” Now when they heard of the resurrection of the dead, some began to sneer, but others said, “We shall hear you again concerning this.” So Paul went out of their midst. But some men joined him and believed, among whom also were Dionysius the Areopagite and a woman named Damaris and others with them.
-Book of Acts

Ya, I stood on the Aeropagus. The very place Paul was in the 1st century A.D. It was awesome.

I also ran in the original stadium in which the Greeks ran in for the Olympics. All of the guys raced each other the full 200ish meters and I won. Another great moment. 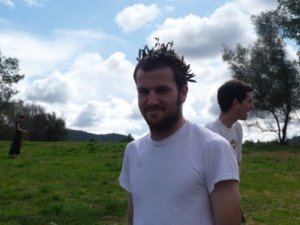 While in Delphi, 7 of us hiked up the mountain in which the Throne of Apollo used to rest upon. The day was beautiful and the hike was relatively easy. That day, all 7 of us referred to ourselves as Bear Grylls. 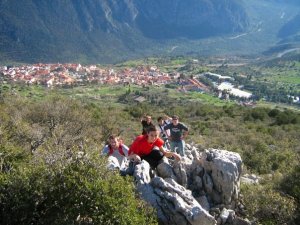 Also, in Delphi, my dinner table controlled the restaurant. The place served us these doughnut hole things doused in cinnamon and powdered sugar. Since our table helped serve some water and french fries, they gave us 3 extra plates of the delectable desert.

Both nights in Athens we went to the local Starbucks. I miss good American coffee. We also ate dinner at KFC. It is not Babes, but it definitely hit the spot.

I also gained a new nickname in Athens: the Dog Whisperer. While we hung out at a local bar on the street, a pack of dogs made their residence next to our feet. All in all, about 7 or 8 sat around us. This pack of dogs attacked 3 men. One of them fended them off with a chair while another used his bag. But when the 3rd attack began, I yelled at the wild dogs and they all came and sat back down with us. The Dog Whisperer.

Have you checked the news lately? The Acropolis shut down the day we were supposed to go to it because of a strike by its workers. Great timing.

Our last stop was in Nafplio. If you want to know about my excursions up this mountain, which I am not proud of, email me or Facebook me and I’ll send you a detailed story of what went through my head and heart.

Along with staying in Delphi, Olympia, Athens, and Nafplio, we visited Corinth and Mycenae on day trips. You can check out more pictures here:
http://picasaweb.google.com/mcgeejm/Greece#