Yes, it has been a while since I updated. I apologize. This will probably be a little long so you can either bare with me or skip it all together. I’m a little lazy right now so I don’t want to proofread all of this. If it is impossible to read, let me know and I’ll go back and check it all.

Not this last weekend, but the weekend before, our entire class went to the city of Pompeii to check out the ruins. Pompeii is an incredible city to walk around. You are literally wandering into houses and walking on the exact stone of a city that was completely destroyed and covered in ash by Mt. Vesuvius in 79 AD. The most surreal moment was viewing the plastered bodies of people along the wall of the city who were attempting to escape the destruction. The place in which we viewed the bodies are in the exact place in which they died. 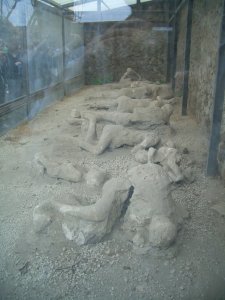 Now, about the trip to Sicily. We had a flight to Palermo, Sicily early Friday morning so instead of waking up at 4:30 to catch a taxi, a few of us decided to spend the night in the airport on Thursday night. Here is where a few problems occur. First off, Kara, Khang, and I made it to Termini, the train station in Rome, 20 minutes after the last train left to the airport. After Kara tried to persuade the cab driver to lower his fare, to no avail, we decided to take the B line metro south with the hope of walking the rest of the way. On our way to the metro, the train security began to close the gate. We had to run to make it through the gate in time. When we made it in, we went to the side of the B line that was going north, instead of south. We only had two minutes until the train arrived so we had to run around to the other side where we barely arrived in time.

We had a map of where the airport was located, thanks to a map that Dr. Roper drew for us. Unknowingly and surprisingly of course, the map was not drawn to scale. But not knowing this, we hopped off of the B line at a stop we arbitrarily chose. Not only did we walk the wrong way out of the train station, but we realized that the airport was about a 3 hour walk on a highway. Oh ya, I forgot to say, it is midnight by now. So we decided to bite the bullet and pay for a taxi we found at a random Sheraton Hotel we ran into.

At the airport, we spent the 1:00 AM hour reading Aeschylus’ The Eumenides. Good play but lets just say, I forgot most of the information of the play when I took the quiz on Monday. Oh well.

But we finally made it to Palermo, Sicily after little sleep and a short flight. We spent most of our time in Siracusa, which is on the eastern coast, and on the road enjoying the beautiful scenery of middle and eastern Sicily. When in Siracusa, we saw the 3rd oldest amphitheatre, a beautiful Greek theatre that looked out on the sea, and the “Ear of Dionysus” which is a large cave while staying in a nice, cheap, and quaint Bed and Breakfast. 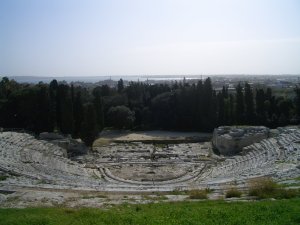 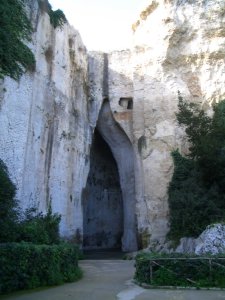 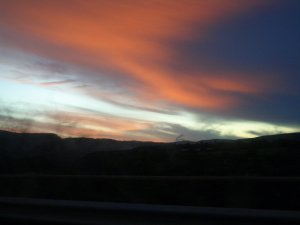 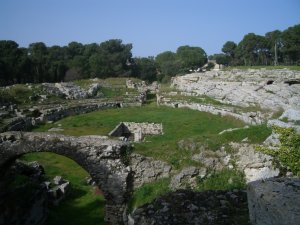 Cool stuff, so I think.

Another airport story. Kara had a different flight than the rest of us so she was going to sleep in the airport again. So Khang and I decided we would join her and sleep in the airport. Lets just say that the Palermo airport isn’t as nice as the Rome airport. I slept a few hours early while Kara and Khang stayed up and then we switched. They slept while I kept guard. As I was sitting and reading the Phaedo at 2ish AM, a homeless man makes his way into the airport. He wanders around attempting to get into every locked store and room. He fiddles around with the pay phones for about 15 minutes as well. After all the failed attempts to get into stores and rooms, he decided to attempt some art. Three or four statues stood in the middle of the airport and he thought it would be a good idea to decorate them.

So for around 30 minutes, he rummaged through the trash gathering paper and bottles for his masterpiece. To be honest, I was a little nervous to look his way so I was noticing most of this through my periphery. When he has finished and sat down out of my view, I decided to look at what he had done to the statues. He placed a water bottle in a horses’ mouth along with putting a sheet of paper in horseman’s hand. He had also scattered paper, cups, bottles, and other objects on all the other statues in the middle. Hands, arms, and heads had trash on them. All and all, it was a strange and somewhat nerve-racking experience to encounter at 2 am in the morning.

Also at the Palermo airport, my friend Steve tried to smuggle in a cheap bottle of wine that he was going to give his dad since he is Sicilian. Of course, the security caught it. When they retrieved the bottle, they made the mistake of putting the wine in the nearest trashcan. Steve and a few others decided they could get it out of the trash can with no one noticing. They scanned the area making sure the cameras didn’t point near the trash can and checked to see where each guard was. When the moment was right, Steve made a run for the wine. Steve successfully obtains the wine and makes a dash for the gate.

While at the gate, I noticed a contingent of security guards congregating near the gate. I told Steve and he proceeded to sit and stay as unnoticeable as possible. Multiple guards then made their way too where we were sitting. As Steve sat nervously for what was to come, the guards called on 2 other guys and a random girl who wasn’t even part of our group to bring their bags to them. The guards, of course, found nothing. They came back, seeming to be a little irritated, and went over to Steve’s bag. They opened it up and found the bottle. A guard grabbed Steve by the neck and escorted him into an interrogation room while making a scene about it all in front of the entire Palermo airport. All of us sat in utter confusion on what was to come with Steve.

Steve said that most of the security guards of airport joined him in the interrogation room. They proceeded to scream at him in Italian which Steve knows none of. After noticing that his last name is Grosso, which is Sicilian, they become highly confused at how he can’t speak any Italian. They can’t believe it. They yell at him a little more. After all of the inaudible screaming, the cordially shake his hand at let him leave…without the wine. Crazy.

So those are my recent experiences. More to come I’m sure. I’m going to an AC Milan vs. Inter Milan soccer game this weekend so I’ll probably have something to say about that.

If you would like, you can check my pictures to view what else I saw in Pompeii and the other places. I also put pictures of our trip to the Capitoline Museum, which was great, as well as pictures of my trip to Sicily. If you have any questions, feel free to ask.

One thought on “Pompeii and Sicily.”